Today I put the finishing touches on my fabric reorganization! There are still a few odds and ends to take care of, but most of the heavy lifting is done. Before: 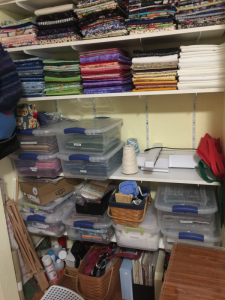 I didn't take a "before" picture of the bins, but odds and ends of smaller fabrics were crammed in there and now they're neatly cut into 5" and 10" squares: 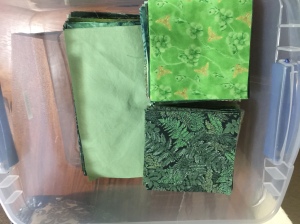 And I can actually get to my machines:

I'm already reaping the benefits of being a little more organized. Last week hubby bought a backpack at the thrift shop, but didn't like the logo that was on it. He asked me to embroider a WSU logo. Formerly I would have put him off because it would have taken me at least an hour to find my supplies and uncover the machine. As it was, the whole project took just a little less than an hour and he had a great backpack for $2.99.

Other than that project, I haven't been doing any sewing because I've been too busy organizing, but am hoping to get back in the saddle next week. In the new year I do need to start looking at some projects that will use up my 2" strips. I ended up with a lot more of them than I expected!

I'm sure I'll be able to talk Mei-Mei into coming up and helping me with that.

This past weekend we took our annual trip to Tall Timber Snow Camp with our church. We missed it last year because of my back surgery, so the girls were very happy that we got to go this year. There was lots and lots of snow, but fortunately the roads were fairly clear.

Isobel and I did some cross country skiing, but I think this may be my last year of that. I fell four times and felt pretty banged up by Monday. Next year I think I'll do snow shoes instead! 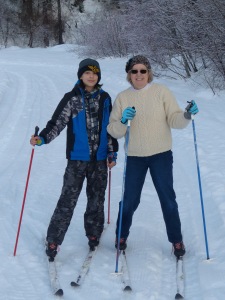 Mei-Mei played a little in the snow, but for the most part felt content to stay inside the warm lodge. I taught knitting classes and she brushed up on her skills and perfected what we referred to as "yoga knitting."

On the way home we were greeted by a beautiful rainbow on the ferry. 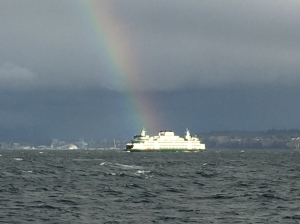 Right before we left, Bill took delivery of his new classic car – this time a truck! It's a 1972 Datsun pickup. It was pretty funky from being carried on an open transport from Texas, so the first order of the day on Monday was a bath. 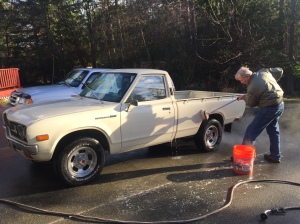 I had mentioned before that I was reaching the end of a longterm project – Aunt Gracie's Garden (pattern by Cynthia Regone). At our last guild meeting I was lucky to be able to display it on a quilt rack and get a good picture. The colors are a little bit washed out, but here it is – and I love it!!

Right now we have a down comforter on our bed, but I can't wait until spring to be able to use this instead.