When I first started my blog, it was mainly a knitting blog and I met many new friends this way. I remember at first it was a little scary and when I headed off to meet one of them in person (Hi Li!) my friends thought I was a little crazy. I told them it was improbable that an axe murderer was going to arrange to meet a middle aged woman in a yarn store!  Fast forward fourteen years (yes, I've been blogging that long!!) and the blog has morphed into other areas as well – music and quilting and I'm sure lately my knitting friends have wondered if I've abandoned knitting altogether. Never fear. Like many things in my life, I go in cycles and knitting is starting to make a comeback.

One of the reasons I haven't been knitting much is the lack of a project that really intrigued me. I was working on a Jared Flood afghan and while perfectly lovely, it was the same thing over and over and over.

It got to the point where I'd rather poke a knitting needle in my eye than work on it. While wandering around on Ravelry I found the pattern for A Celtic Quilt 2 and I was smitten! Not only are there multiple different designs, but they are smaller squares that are not sewn together, but attached with a 3 needle bind off. So here's the crazy part – I frogged the other afghan. I know, non-knitters are probably aghast at the "waste" of all that time knitting on it. But I think knitters will agree that there's no point slogging along on a project you hate when you could be doing something much more fun. So far I have 3 squares done. 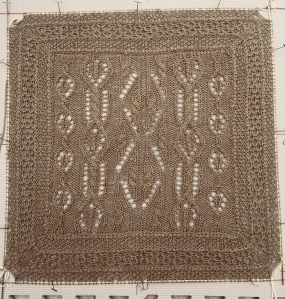 The middle photo is the most accurate for color. Oh, and I may have cast on a couple of Dee O'Keefe shawls too.

The first is Anisah and the second is Katania. I have to admit Katania is a little boring, but between my husband and friend having cataract surgery, I've spent a lot of time sitting in doctors' offices waiting and it does pass the time.

A couple of quilts have made it off the UFO pile, too. The first is a quilt requested by hubby to hang over his computer desk. The pattern is Drunkard's Path (his choice!), but I think the dark patches look like birds. I quilted the light squares to look like airplane props with the wind flowing around them, so I've named it "Air Birds." 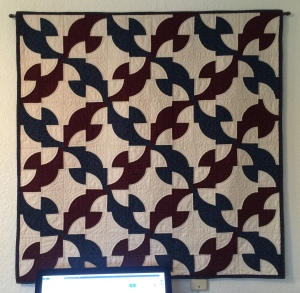 The other is a quilt made with my Round Robin group. One of the ladies brought back fabric from Alaska for each of us. Mine was a batik with grizzly bears, so I set them in a Bear's Paw block for the centers and the other members added the rest of the borders. The last border has the constellation with the bear in the sky, so I have named this one "Ursa Major." I especially like the pink salmon swimming upstream. I couldn't figure out how to bind it with the stark difference in colors, so I faced it instead. It's the first time I've done this and will use this technique again.

To combat all the hours spent sitting and sewing/knitting, I've been trying to get out more and have done a couple of hikes with Abby. The first really challenged me – it was a 5 mile "moderate" hike (although for me it was more like "difficult") and the second was truly an easy two mile stroll with the grandkids.

That's it for now. I think I may take some time this week and go back over my blog starting from the beginning. It's so funny to think that when I started it, we hadn't even met Abby yet! So much has happened and it will be fun taking a trip down memory lane. Ta ta for now!