While marital mongamy has always been a slam dunk for me, project monogamy has been less so.  I'm not sure what the record is for the most projects in progress, but it seems as if 8 or 9 was probably the norm at one time.  Lately, I've been a little more faithful to my projects and it certainly pays off in FO's! Our knitting group started a project last January in which we all picked a pattern for a gansey.  I don't think any of us were doing the same one.  I thought for sure I would be the last one done because I picked Cape Cod by Alice Starmore.  At her hellatious gauge, I had to use fingering weight yarn and size 0 needles.  It just goes to show what a little project monogamy can accomplish because I am one of the first to finish her gansey.  Behold Cape Cod in all her glory! 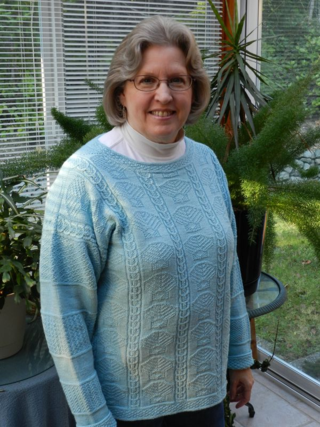 I love everything about this sweater!  The yarn, Knit Picks Gloss is a luscious blend of silk and wool.  I like that it's fairly lightweight so I don't get overheated.  I like the intricacy of the knit and all the classy little touches that Starmore is famous for.  And I love the fit.  A little loose and comfortable, but not baggy.  This will definitely get a lot of wear.  And I have to add that this would have never been finished (or at least not so soon) without Knit Companion.  Recently they released a new version featuring smart counters which helped me with the multiple chart repeats and shaping on the sleeves.

I also managed to finish a pair of fingerless gloves for my sister: 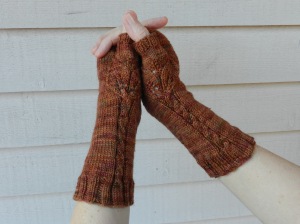 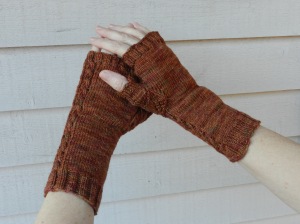 The pattern is October Leaves, yarn is Dream in Color Smooshy in Chinatown Apple.  Wonderful pattern with lovely detail in the thumb area.  And I have enough left from the skein to make another pair.  Brown's not really my color, but I think I'll make them anyway and put them aside for a gift giving occasion.

That leaves me with only two wip's (and one in hibernation that may be frogged).  Neither Evenstar or Dark and Stormy are real portable projects, so I cast on for a pair of Cookie A socks – Hedera.  I keep saying I'm going to knit my way through her book, Knit Sock Love and they are the first in the book, so it's a start.  No promises as to how far I'll get.

I did have a little moment of insanity and jumped on board a KAL.  The project is Dragon of Happiness.  Go take a look and come back laughing.  Insane, no?  Of course, I did have to break my yarn fast (hey, I lasted all of 3 weeks!) to order the yarn.  And I think I just may have, in a moment of weakness, ordered some Signature needles to go along with it.  This project is not going to go fast and will need frequent breaks, but I might as well be deliriously happy while knitting it!  Of course, I know that I'll want to go throw all my Knit Picks needles in the trash.  Or win the lottery.

My training for the half marathon is coming along, but not without a few bumps in the road.  Today our club did a spin class.  Let me go on record as saying that I hated it with a passion that is just a little scary.  The endurance part was hard, but I could probably get over that.  But without getting too technical, just let me say that the bike seat was painful!  Even with an extra cushion they provided I was miserable the whole time.  Next time they schedule a spin class I'll just go for a little run.

It's me again.  At least I'm starting off on the right foot.  Don't know how long his will last!  In looking over my previous posts, I realized that I left a few things hanging, so here's some catching up.

I left you with my son's cardigan lying in pieces.  It's since been finished, declared acceptable and worn on a regular basis.  Here's my handsome son: 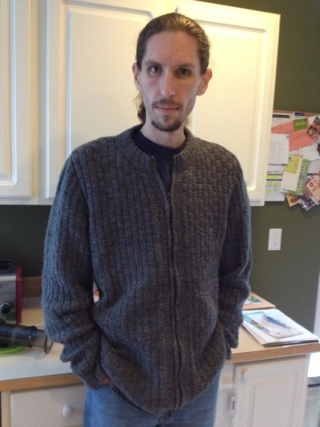 Now I have to get busy repairing his other sweater.  He tore a hole in the elbow, which you may recall I repaired once, but it has since come open again.  I finally decided that in the time it took me to repair it again, I could knit a whole new sleeve.  Here's the rub – all the comments on Ravelry indicated that the sleeve as written was too full.  So I input some data in Sweater Wizard and calculated a new sleeve.  Did I save it?  Duh, NO!  And I can't remember what figures I used, so I'm going to have to do some counting on the present sleeve and see if I can figure it out.

I also left you all hanging right in the middle of our bathroom remodel.  That, too, has been finished and we couldn't be happier.  I must admit hanging the striped wallpaper was a little challenging when we realized that the walls are not completely plumb and the corners of the room are actually curved a little.  Here's before and after: 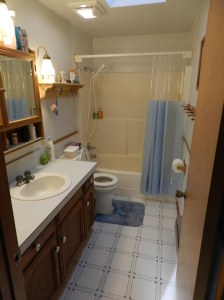 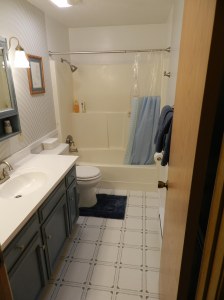 It's a little hard to get a good picture of such a small room, but the remodel really did make a big difference – it's so clean and updated now.

I have been knitting like mad on Cape Cod and have finished the first sleeve.  I tried it on for the first time and am really, really happy with the fit. 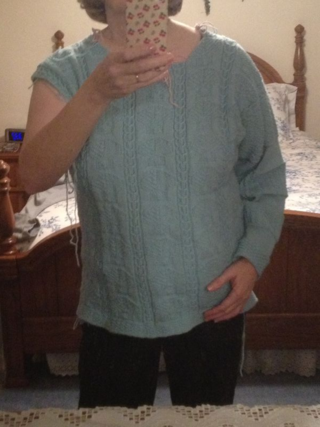 I am not, however, happy with the underarm gusset. 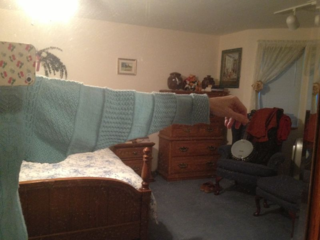 It appears that the gusset is totally unnecessary and just adds a lot of bulk to the underam area.  Those of us ladies of a certain age certainly don't need anything resembling wings!  I'm debating what to do.  It's not just a simple matter of ripping back the sleeve, although I certainly would consider that if it was.  I'd also have to rip out the fronts and backs down to the armholes, and I am not willing to do that!  Since it's not really obvious unless I hold out my arms and since that is a stance I seldom take, I'm pretty sure I'll just leave it be.  Any and all suggestions are welcomed.

In other knitting news I started some fingerless mitts for my sister.  I stuck some sock yarn in her Christmas stocking with the promise of a new pair of socks, but by mutual agreements we decided instead on mitts.  These are Hedgerow Mitts. 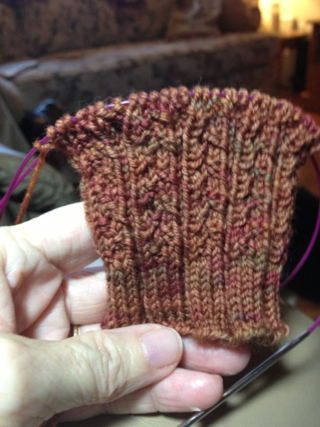 I had made a decision several weeks ago to sell my spinning wheel.  I even went as far as to put an ad on the local website for the spinning guild.  I admit that I was motivated a little bit by my inability to spin the yarn I really wanted and I know, as Kathryn has so wisely pointed out that I probably need to give it some more time.  But I was also moved by consideration of time.  It seems that I have so many interests that compete for my time – knitting, spinning, quilting and digital scrapbooking (to say nothing of the time it takes to train for the half marathon).  Sometimes I look at people who are a little more "concentrated" on one craft and envy them a little.  I feel so torn with my time.  On the positive side, I am almost never bored!  Thankfully I have had no bites on my ad and I think I will have it taken down.

And, speaking of quilting, I finished the top on a project that several of my friends and I have been working on.  We all did the same pattern, but in our own individual fabrics.  I chose a palette of Asian fabrics and was a little apprehensive that the "country" feel of the pattern would not be a good match, but I am pleased with the results. 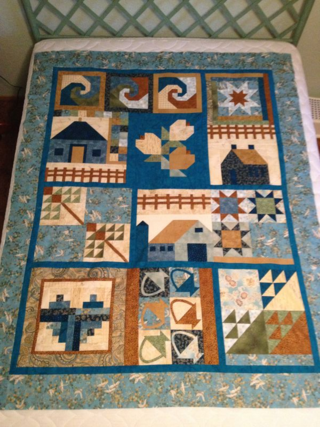 One of my goals this year is to work on my machine quilting skills.  I have a stack of tops that will never be finished in my lifetime if I don't learn to machine quilt and finish them!