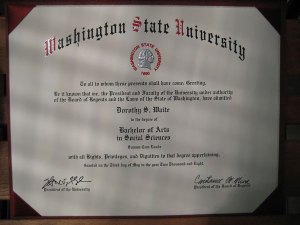 Until this came in the mail, I couldn’t help thinking that when they reviewed my transcript, they would find I was one credit short. But I passed muster and it is indeed over. Whew!
Also in the mail was this: 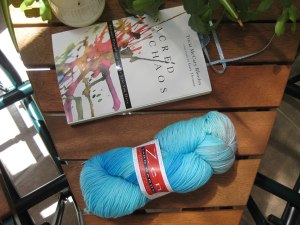 It’s a wonderful skein of Zen Garden Squooshy in the Anna Grace colorway! This is named after Isobel’s buddy who has fought the battle with apraxia and is winning. Way to go Anna Grace. Words can’t describe how beautiful the colors are and how, well, squooshy, it is. You can have your own skein by bopping on over to Sonny and Shear.
You might notice the book lying beside the yarn. My church friends know me pretty well and this was a book they presented to me in honor of my graduation at last week’s service. The main focus of the book is that we put too much emphasis on having “quiet” time with God. When life gets chaotic, we put God on the back burner because we just don’t have time (or think we don’t). But we forget that God is there even in the midst of chaos. We don’t need huge chunks of time to commune with Him, but can include Him in every aspect of our busy lives. I highly recommend the book.
Chaos does seem to somewhat define my life right now. I seem to be hurtling in 100 different directions at once. It finally occurred to me the other day that it’s because I promised myself that when I graduated I would . . . . . (insert activity here). My problem now is that I’m trying to do them all at once! I seem to start one thing and before it’s finished I’m flying off starting something else. I really need to settle down and get focused.
One of the things I really wanted to delve into is baking bread. I love everything about bread – baking it, smelling it, eating it, thinking about it. I’ve even been grinding my own wheat with a friend’s borrowed grinder. But now I need borrow no more: 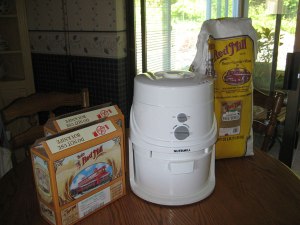 A brand new wheat grinder and 40 lbs of wheat purchased with a friend’s very generous graduation check! It arrived yesterday and I spent a great deal of today cleaning out and reorganizing my pantry so that all my bread making supplies are somewhat centralized: 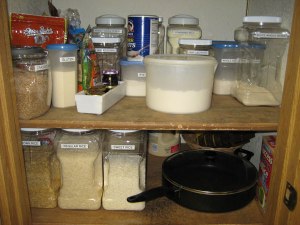 I should have taken a “before” picture so you could see what a mess it was. I now have some loaves rising in the kitchen. Of course, as hubby pointed out, I’ve picked the hottest day of the year so far to bake! But when you work, you can’t be picky. You have to grab the free time when it’s available. Besides, I have this to keep me cool. Kristen will appreciate this: 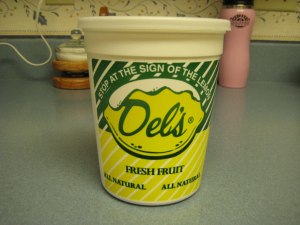 I don’t think this is available anywhere except Rhode Island. I’m not sure how I came by this – probably a gift from someone who traveled back there. I found it while cleaning out the pantry. You can’t believe how refreshing it is on a hot summer day. It’s kind of like a slushy lemonade, but not too sweet.  Yes – it finally got hot here. Well, relatively speaking for those of you in other areas. I think we may have hit 80 today.
Off to check on my bread. Next week I promise knitting content and a report on a trip to Starbuck’s
June 21, 2008October 18, 2018 missouristar6 Comments

We're home safe and sound after a fun trip to Portland.  We went to the Pacific Northwest Micro/Mini Car Show.  Before reporting, I must first correct my previous post.  Hubby's car is a 1930, not a 1931.  A grievous error, to be sure.  My apologies to Malcom (the car).  There were some pretty amazing cars there, but it was quite gratifying to see that in a show of very rare cars, hubby's car drew many admiring comments.  There was even a car broker there who asked all kinds of questions and then put in a quick phone call saying, "I found one!"  So who knows if we might get an offer.  Malcom is not really for sale, but as hubby says, almost everything has a price.  While there I got to ride in some pretty unusual cars.  First up, a 1955 Messerschmitt: 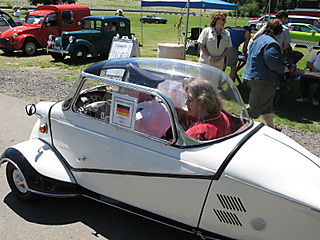 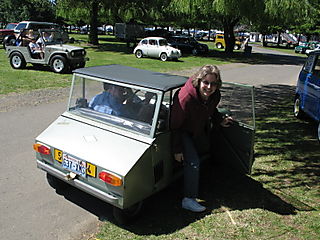 The guy that owns it is a professor at UW and says he occasionally drives it to work.  In Seattle rush hour traffic.  I think he has a death wish.

But by far my favorite was this: 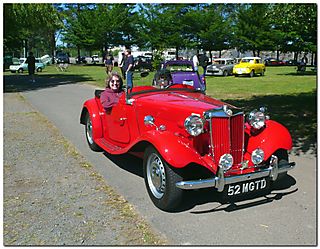 Don't you think I look pretty good in that?  The guy that's driving has owned the car for 31 years.  He bought it and restored it while he was still in high school and drove it to his senior prom.  I'm sure the girls were lining up to date him!

Six hours up and six hours back with lots and lots of sitting around at the car show provided plenty of knitting time (when I wasn't trying to keep warm – it was cold!).  Although I didn't manage to get a pair of socks and two toddler sweaters done, I almost completed one toddler sweater: 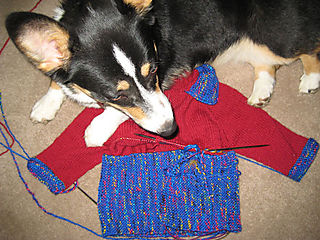 I probably would have completed it but for the miles and miles of garter stitch on the lower half of the sweater.  This one will be for Ivy.  Forgive the little critter in the picture – she was trying to help. 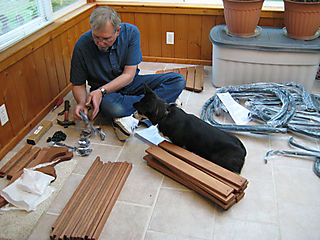 We decided to do our bit for the economy and spend our tax incentive.  We're sprucing up the backyard and fixing up the sunroom.  We built this on about 10 years ago, but it has had limited use in the summer because it gets too hot.  So hubby has built heat reflective screens for the top panels and we bought the glider set so we can sit out there on summer evenings – or any other time for that matter.  I've taken some before and after pictures and will post them when we're done.

Next week I should have some fun stuff to report.  Last year at a charity auction, my sister won a package from Starbuck's.  Next Friday, she and I, my best friend Jan and another friend will get to attend barrista school at Starbuck's in Seattle!  I think it's going to be a blast.  The funny thing is that my sister doesn't even drink coffee.  But I do!  I'll probably be in a caffeinated buzz big time by the end of the day.

Hubby and I are off on a road trip this weekend.  We're headed off to Portland for a micro/mini car show.  We'll be towing his 1931 Austin.  Should be lots of fun and between the time on the road and sitting around at the show, I'll get in lots and lots of knitting time.  Do you think this is enough yarn to take? 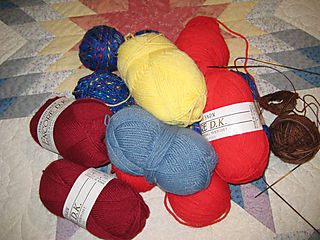 Ok, just kidding.  This was the pile I was auditioning for the trip.  This is what I'm actually taking: 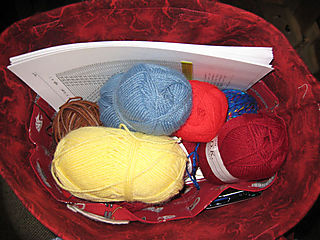 Still a lot, I know, but I always have this irrational fear that I'll either run out of things to do or will have the wrong things with me.  I always, always overestimate how much I'll get accomplished, but I know I'm not alone in that little quirk.  Projects for the trip include a new pair of socks and sweaters for the girls for Christmas.  You never know, I might actually finish two toddler sized sweaters and a pair of socks in a weekend.  Ya think??

I had mentioned before that there were more graduation gifts to come.  This beautiful rose bush was given to me by friends at church (it smells lovely): 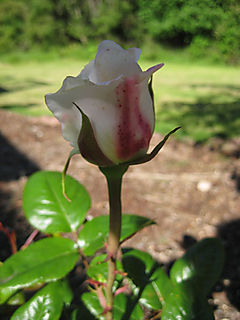 This plate was made by my friends at work: 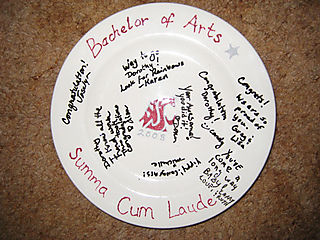 And best of all was the gift from hubby: 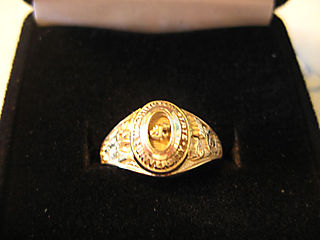 A class ring!  It has my name, year of graduation and degree.  He came up with the idea all by himself and said that I earned it.  What a sweetie!

I've spent part of this week working on organizing my stash.  It all started with moving a cedar chest out of the sunroom.  We're hoping to do some redecorating out there with our tax incentive.  We'll be looking for some kind of seating arrangement.  The chest has held my stash, which I moved to a plastic storage unit we bought at a garage sale.  I bought some space bags at Walmart and started inventoring my yarn on Ravelry.  I'm also cleaning out and took a huge bag of acrylic baby yarn to the ladies at the Methodist church who knit for the Pregnancy Care Clinic.  I still have more to do, but I'm feeling a little better organized already.  And I was able to find yarn for Isobel's and Ivy's Christmas sweaters instead of rushing out and buying more.  I feel very thrifty.

Maggie has found a new toy – the treadmill.  She loves walking on it as long as I'm willing to stand there and give her a Cheerio now and then.  I don't get much exercise this way, but she certainly does. 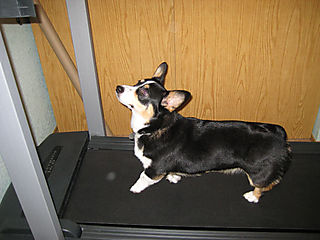 And speaking of Cheerios – guess what Izzy calls broken Cheerios?  Cheeri – U's!  The kid's a genius.

No, I haven't fallen off the face of the earth – I'm still here!  Just the busyness of life.  I've also been doing a lot of quilting lately.  There have been times when I've worried a little bit about the blog.  It's been mainly a knitting blog and I've wondered if I would lose readership if I started blogging about quilting rather than knitting.  But then it occurred to me that adapting my life to fit the blog is a little like the tail wagging the dog!  So you'll get quilting and knitting and I hope you all stick around.

I do have a quilting FO to share.  Our quilt group had a guest speaker – Jodi Barrows.  She demonstrated her Square in a Square technique.  I was so excited about it that I came home and made this little quilt just in time for the upcoming July 4th holiday: 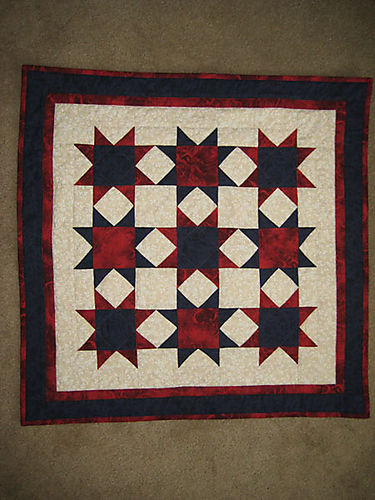 Although there's been precious little knitting going on, I do have modeling photos to share.  Doesn't my mother look gorgeous in her Flutter scarf? 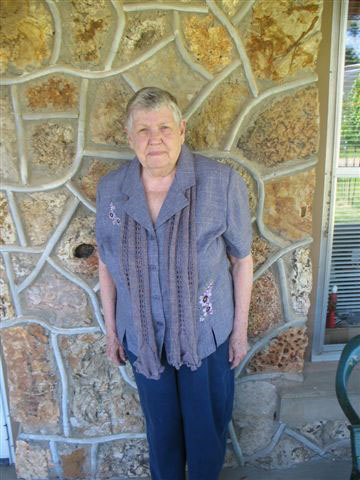 My brother not so much! 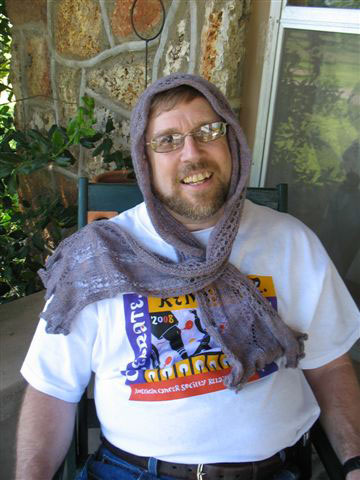 In August our knitting group is hosting another group for a picnic.  We always have little gifts for them and this year it's felted clutches.  Here are mine before: 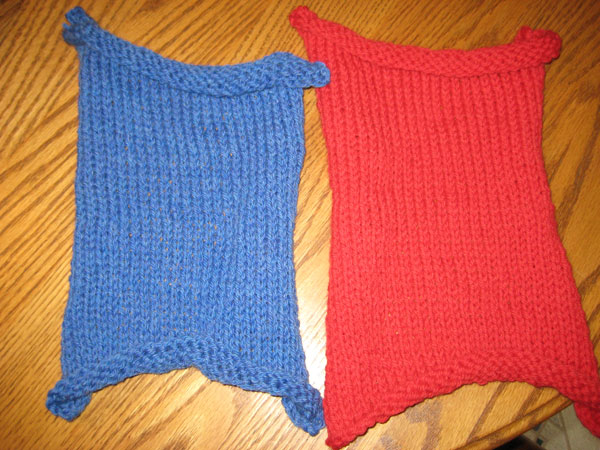 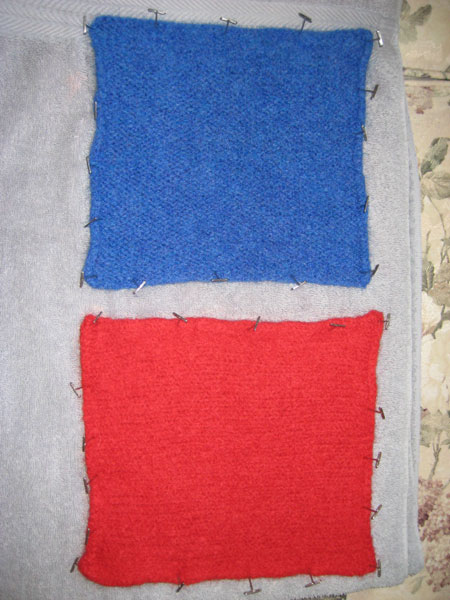 Next up is embellishing.  Some are embroidering, others needle felting.  I'm going to give a whirl at machine embroidering them and see what happens.  The good news is that if I ruin them, they take about an hour or so to knit up.

I have a few male readers (hubby, my son and my father to name three) who may want to walk away from the post at this point.  I'm going to rant about a certain article of lady's intimate apparel.  Ok, hubby can stay – he's heard it all.  Bras!  What sadistic monster created them in the first place??  Certainly a man!  Lately I've come to the conclusion that comfort is what it's all about and I just can't seem to find a comfortable bra.  Does it even exist?  I've probably spent a fortune looking for something that doesn't pinch, prod, poke or cut off circulation.  I've even gone as far as to start reading blogs that tout the joys of going bra-less.  Don't think I'm going to go that far, but I've certainly been tempted.  Any suggestions out there?  Tomorrow I'm going to drive over to the mainland to Macy's and attempt to be fitted.  I'm not holding out great hopes, but miracles do happen, I suppose.