Two lights are emerging at the end of the tunnel and neither one appears to be an oncoming train!  Ben and Abby are moving into their house today.  Yesterday Abby and hubby (mine, not hers!) went down and cleaned the new house to a fare-thee-well.  Ben stayed here with me and helped with the girls and attempted to get things on this end organized.  This morning they loaded a 17-ft. U-Haul and they were off.  We will keep the girls for the night and deliver them down tomorrow.  We almost hit a major snag when we realized that they had taken off with both keys to their car with the car seats that we were going to use to take the girls home tomorrow!  Thankfully, Ben's friend's parents are there and coming back here tonight, so they're bringing the keys.  Whew!!

Of course, this means we get the girls for Halloween for the first time.  We really weren't going to do anything, but Grandpa couldn't resist some cute costumes he saw at Wal-Mart and came home with them.  He is such a softie!

Currently Mei-Mei is napping and Yeh-Yeh and Isobel are carving a Jack-o-Lantern.  Isobel is especially fascinated by the "pumpkin goo". 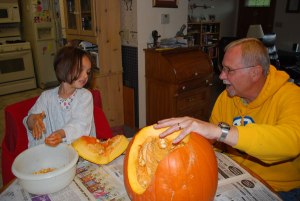 The other light is, of course, retirement, which looms ever closer.  Things at work have been especially difficult and I decided this week that I really needed an attitude adjustment.  There is so much that I cannot change so I need to really focus on anything positive so that I can leave in the best light possible.  The wife of the older doc, who was the first owner of the practice, asked me the other day if I would be coming back after I retire as a consultant.  I told her that I hadn't been asked and I would have to make a decision depending on the circumstances.  The only thing, is that so far, they haven't asked my opinion on much and when they have asked it, don't follow my suggestions.  It's hard to believe they would want me back after I leave, but I suppose it depends on how desparate they get.

I'm really looking forward to getting back to some more challenging knitting projects.  Everything has been in such turmoil for the past two months, I simply could not focus on anything even remotely intricate.  Plain old stockinette has done it.  I have, however, finished two Wonderful Wallabies: 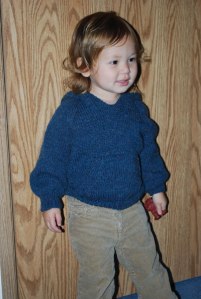 And I also made a contribution to our Thing 1 and Thing 2 costumes: 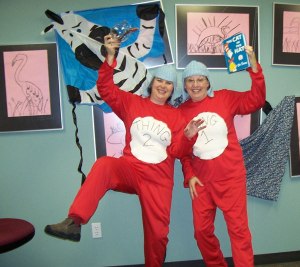 So, tomorrow, things get back to "normal", whatever that is.  I will, however, miss coming home to Mei-Mei running up to me, wanting a cuddle and saying, "I missed you Nana".  And, of course, sharing spaghetti ala Lady and the Tramp:

But all of that is only an hour and a half away!

No, that's not a typo.  Recently Marguerite and I were chatting about Cookie A's book, Sock Innovations.  When it first came out, we both expressed our intentions of knitting every sock in the book – we were so in love with them.  Marguerite has come a lot closer to that goal than I have, having completed several pairs.  I haven't even completed one.  We were discussing her experience that while the socks are indeed lovely, they are not quite as well fitting or wearable as a lot of the "Plain Jane" socks we love and wear almost every day.  Which begs the question, "Why knit them?"  The case could be made that they are works of art.  As I explained, I could knit shawls for the rest of my life and never wear a one because I consider them works of art.   But socks?  If they were works of art, you'd only have to knit one!  So this is indeed "foot for thought" and I am reconsidering my goal.  Of course, it's an entirely moot point now because my knitting time is mostly engaged in completely mindless stockinette stitch sweaters for little bodies.  I did complete Isobel's and I don't think it's been off her body except for a quick trip through the washer:

Note the blueberry face!  Given her love of blueberries, I think the choice of yarn was perfect.

Mei-Mei is currently wearing the Wonderful Wallaby I made for Isobel when she was a baby:

It's a little snug but does the trick.  Her new one is in the works and I just finished fusing the pocket to the body.

Wonder of wonders, I did manage about an hour of sewing in my sewing room yesterday.  I asked hubby if he would help Abby keep an eye on the girls and snuck in there for some solitude and quality time with my sewing machine.  It was a challenge – all of Ben & Abby's luggage is there, but I managed to clear a little hole for myself and finished the blocks I've been working on for a mystery quilt I'm doing with friends: 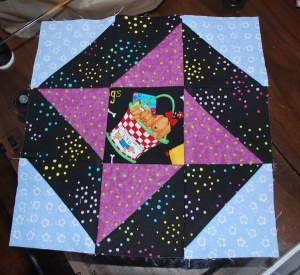 I can't remember if I've mentioned this group or not, but it's a small group that's alternated between 4-6 members.  We've been meeting for over 10 years.  At times we do a Round Robin project, other times mystery quilts or just help out on blocks for each other.  We've done some pretty mind boggling projects, and others that are just simple.  Regardless, they are a wonderful group of ladies and we so enjoy our time together.  Next time we meet I'll try to remember to take some pictures.

I'm plugging along at work, literally counting the days (down to 60!!).  Things have not been easy.  I think I finally figured out why the new doc and I are a little like oil and water.  The two previous docs have always treated me like an equal partner.  The new doc treats us as if he is the captain of the ship and we are his crew (not surprising – he is a former Navy Captain).  Don't get me wrong, he's a great human being and a great doc and is kind and compassionate.  But there is no question that I am just an employee.  Many administrative privileges that I had have been taken away.  This is not necessarily wrong, but just a different management style and one that I am not used to.  I've tried very hard not to make waves because it really doesn't make any difference.  However, I do think it is good that I'm retiring and making way for someone who isn't used to the previous regime.  We will be promoting someone from within to my spot, but she's only been with the practice five years and will not expect, or even desire, the amount of responsibility I was accustomed to.  Tomorrow I start interviewing candidates for her replacement.  With any luck we will have someone by the end of the week and I can start training.

I leave you with more granddaughterly adorableness: