I hate computer guys!  With few exceptions they are arrogant know-it-alls who delight in impressing you with how much they know and if they can make you look stupid in the process, so much the better.  We had new computers installed in the office the past two days and it was a miserable experience.  For instance, once everything was finished, I tried to install a shortcut on my desktop, but the computer wouldn't allow me to do so.  I asked the computer guy about it.  Instead of saying, "Here, let me show you a better way", he said, "Why in h*** would you want to do that?" and proceeded to let me know that what I wanted to do was not only stupid and ridiculous, but a complete waste of time.  All of this in front of a room full of employees and a waiting room of patients.  My only delight came on the first day when, after 5 hours of work they were unable to make our practice management system work.  They called our software support and were informed that our software does not work on a 64 bit operating system – only 32 bit.  They pulled out the sheet of hardware/os requirements, which I had sent them, and sure enough.  It said right on there 32 bit!  It was a sweet moment.  They did manage to make it work by some nefarious method, but they were there until midnight.  My heart did not bleed for them.  And yet, surprisingly, I'm not bitter!

Through it all my support system was gone.  Hubby is still in Orlando helping with the packing and moving, so I had only the dogs to complain to.  A bright spot in the week was the arrival of a little stash enhancement:

This is Lorna's Laces Shepherd Sock yarn in one of the Sock Summit colorways.  How could I possibly resist a yarn named "Whidbey Island"?  It does help that I love the colors as well.  I'm not quite sure what to do with it, though.  The color runs look rather long.  I guess I'll just have to pick a pattern and run with it and see what happens.

Only two more days to go and everyone will be back home where they belong.  Ben and Abby and the girls will be staying with us while they look for a house to buy, so I imagine things will be pretty insane.  I promise to keep you posted!

I had a goal of making a baker's dozen of these little baby sweaters, but I am ready to say, "Enough"!

I've done nine of them and I don't think my poor hands can take any more.  I've been having a lot of pain in my right hand and went to the doctor's thinking I had arthritis.  He took x-rays and assured me that my joints are in fine shape.  No carpal tunnel either.  He thought I might have injured it somehow, and asked if I had done anything different in the last six months.  The only thing I could think about was knitting all those worsted weight sweaters when I usually only knit with sport weight or finer.  He said to lay off the heavier yarn for a while and file this under the heading of "No good deed goes unpunished."  It remains yet to be seen if the pain will go away, though.

Fortunately, I do have lighter weight projects on the agenda.  I've been knitting on my Embrace the Lace project.  It's a slightly heavier than laceweight yarn and the pattern is a real joy:

However, I am trying not to overdo and am limiting my knitting time with lots of breaks.

Are any of you out there fans of pressure cooking?  I've been looking for something to jump start my interest in cooking.  Hubby has had the major kitchen duties for the past few years, but I told him I'd take over when I retired.  I was reading an article on pressure cookers and I guess they're much more sophisticated than the old jiggling and hissing cookers of years gone by.  I ordered a set of Fagor cookers from Costco.  Unfortunately, the large cooker came with a broken handle and is unusable.  Costco promised me a new one shipped out right away from the manufacturer, but I don't know how long that will take.  In the meantime, I'm practicing with the small one.  Last night – herbed and honey carrots:

They were delicious and only took three minutes to cook!  I also cooked some chicken and livers for Kirby.  He's been real finicky about eating lately.  He's already underweight and we've been a little worried.  Normally I wouldn't kowtow to a dog's turning their nose up at food, but he's 15 and deserves a little coddling.  He loved the chicken, livers and rice, so maybe we have a winner.  Tonight I think I'll make Beef Teriyaki (for me, not for Kirby).

Yesterday I went grocery shopping and loaded up on lots of meat to feed to the troops.  I came home and vacuum sealed it all and popped it in the freezer.  It's nice to have something constructive to do.  Hubby left yesterday morning for Orlando to help the kids with the move.  They'll be a regular beehive of activity packing and getting ready while I sit and wait.  Well, not just sit and wait – I actually do have a whole list of things planned, so I hope that will make the time go quickly.  It's hard being here when everyone else is there!

I did manage to get some little sport weight sweaters done for the girls. 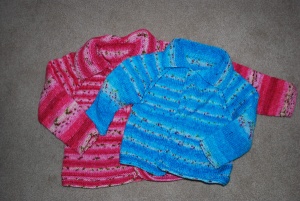 They were going to be Christmas sweaters, but while appropriate for winter sweaters in Orlando, they're more suited to summer in the Pacific Northwest.  Once again I will have to off island for buttons, but hope to have them done to give them when they arrive – NEXT WEEK!  Be still my heart!!

This has been a very busy week, but some of it has actually been really fun busy.  You see, we are getting ready for two little girls to descend upon our household!  The fun part is knowing that visits such as this are going to be a permanent and I hope frequent part of our lives rather than just once in a great while.  We've made seating arrangements: 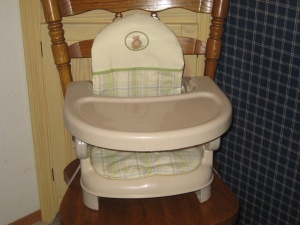 And cleaned out the hall closet to make it into a toy closet.

And have started looking at all kinds of things that need to be baby proofed:

Hubby has been busy contacting realtors to try and find a short term rental while they look for a house to buy, but that has been a challenge.  Most people around here want one year leases.

In between all of this activity, there have been a few quiet moments for knitting.  I had started a couple of top-down sweaters for the girls, intending those to be their Christmas sweaters.  But they are DK weight and just a little too lightweight for winter around here.

So I've been working to try and complete them before they arrive.  They'll be perfect for cool summer evenings in the Pacific Northwest.  I have a feeling all four of them are going to be a little chilly until they acclimate!

It was a busy week at work as well.  On Wednesday we had our first day of general anesthesia.  I had really obsessed about this day with a new dentist and a new anesthesiologist as well.  All of the logistics leading up to it were a veritable nightmare and I was very stressed.  But when the day came, it went off without a hitch.  I even got an "attagirl" from the anesthesioloigist and his nurse for going above and beyond the call of duty in arranging everything.  Sadly, a lead I had on a possible replacement for me fell through.  There is still time and I'm praying that God will send someone walking through the front door, but if not we'll need to start advertising no later than September or October.  I keep telling myself that my replacement is not my problem, but when you've "owned" something for 24 years, you really want it to pass into good hands.  I really don't think I'll have trouble letting go, although hubby laughs out loud at that thought.

We've had more blessedly cool weather and even a little rain this week.  Today is cool and overcast.  Hubby is off to a local car show and Maggie and I may walk down to see him later.  In the meantime, I'm off to do more baby proofing and clean my bathroom.  Exciting, eh??