Hubby and I were discussing recently that this has been one of the busiest summers we can remember.  It seems as if we have been on the go constantly!  We've had company and have spent a lot of time doing all the touristy things.  Some friends from Texas requested that we go up to Canada, since they had never been.  So off we headed to Vancouver, where we made a stop at Granville Market.  I think of it as Pike Place Market on steroids.  There were fruits: 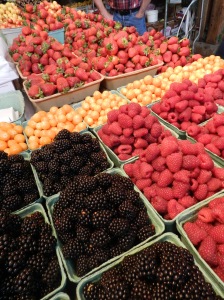 I think a key lime tart may have smuggled its way into my bag.  After battling the horrendous traffic in Vancouver (makes Seattle traffic look like a walk in the park) and a memorable wild goose chase through the hilly streets of White Rock, led by a clown (yes, a real honest-to-goodness clown who was trying to show us the way!), we finally found our B&B and it was glorious! 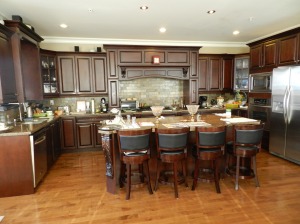 The weekend before I ran my very first 5k!  I was terribly nervous going into it and even more nervous when we ran out of the gate and most of the rest of the runners passed me like I was standing still!  But I persevered and finished in an upright and running position, spurred on by a fantastic cheering squad:

I came in 50th out of 76 runners/walkers and in my age group I was 6 out of 15.  Abby did even better!  She came in 4th in her age group and missed getting a medal by only a few seconds.  All in all we had a great time and I'm going to continue running and entering races.  I would so love to win my age group some day.  Oh, and my goal of running it in 45 minutes or less?  I ran it in 41:26.  Go Nana!

There has been some time for knitting.  One project I'm not sure enough about to mention, so you'll have to wait, but I have been working on Isobel's winter sweater, Iaian:

Also, I don't think I ever posted a photo of Wingspan: 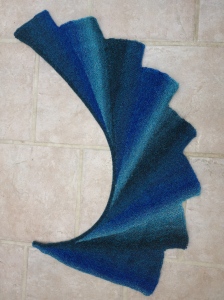 This was a fun knit, but not one I think I would make over and over.  And I'm also not quite sure how to wear it.  I'll have to experiment.  But it is purty, so I may just hang it over a chair and admire it.

The granddaughters are coming for a sleepover this weekend.  Their last hurrah before school starts.  Isobel will be in second grade and Ivy will be in kindergarten (that sound you hear is a huge sigh of relief from Abby!).  Ivy is actually starting early because she missed the cut off date.  But they had her tested and her scores were sky high, so off to school she goes.