Edited: I just checked my blog and was surprised to find out that I never posted this, but just saved it as a draft. So here it is a little late!

It seems as if lately I haven't been spending all that much time at home! Not that I'm complaining, although hubby has been feeling a little neglected, I'm sure. I appreciate that we have the means to take trips and engage in activities that make life interesting. But I am ready to stay home for a while!

My sister and I traveled back to Missouri to spend some time with my folks. The trip did not go exactly as planned. We arrived on Friday night and Sunday morning my Mom was taken to the hospital due to a heart episode. She spent the night and was released the next day with an adjustment in meds and an appointment with the cardiologist. They determined that it wasn't anything serious, but at her age something that does happen. What was gratifying was seeing how quickly help came to them in their remote part of the Ozarks and what a great medical facility they have nearby.

Going back home to Thomasville always seems like a step back in time. I was born there almost 65 years ago and nothing seems to change very much. You would think that the town would either grow or die, but it seems to have done neither. The population was probably around 75 then and numbers close to that now, although it's hard to tell since it is unincorporated – just a wide spot in the road.

While we were there we visited The Hideaway Quilt Shop in the neighboring town of Birch Tree, where my father was raised. From the outside you would discount it, but you would be making a mistake, because inside it is one of the nicest shops I've seen. 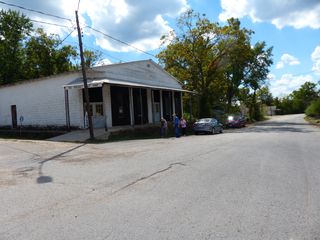 I didn't have room in my luggage for much fabric, but I did manage to score a couple of patterns and a specialty ruler.

But the highlight of the trip was being able to spend time with my Mom and Dad and my brother Mike. The only one missing was my brother Pat. We're hoping in the near future to be able to get everyone together. 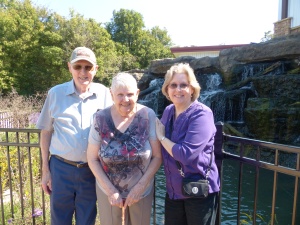 On a completely weird and hilarious note, we spent an inordinate amount of time hunting down cow boats – those of you who are fans of Gary Larson will appreciate this. 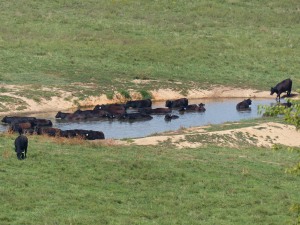 I had no sooner arrived home than I was off again – this time to a three day quilt retreat. Fortunately it was right here on the island, only a 20 minute drive away. The facility, Willow Pond, was fabulous! A large house with a beautiful kitchen and just a short walk across the driveway to "The Barn", which really wasn't a barn, but a large open workspace. There were 15 of us altogether and we spend the time sewing, eating, laughing, eating, playing games and eating more. We divided up into teams for the cooking and each team only had to cook once. I had hoped to get Abby's quilt finished, but discovered that I still needed to buy one more border fabric. I did, however, get the center done. 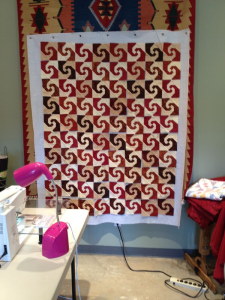 I was also able to almost complete my 30's quilt. I finished the applique border and attached it to the center. All that's left is to finish off with flowers in each corner.

That pretty much brings everything up to date. I'm still knitting, but nothing exciting to show quite yet. And with Christmas coming, there are stealth projects in the works as well! Stay tuned!