I think I may be hyperventilating!

Yes, she is doing exactly what it looks like she's doing.  I really love that girl!

We finally seem to be getting a little summer here in the Pacific Northwest.  While the rest of the nation has been sweltering, we've been a lot cooler than normal.  Believe me, I am not complaining! With no air conditioning we prefer things on the cool side.  But when summer does come to Whidbey Island, it is spectacular – temps in the mid 70's, plenty of blue skies and an occasional cool offshore breeze.  Heaven!

It's gotten warm enough that our tomatoes have really taken off: 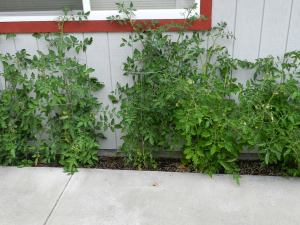 We have lots of little green tomatoes and I'm hoping by September we'll actually have some red ones.  The plant in the middle is an heirloom variety given me by a friend.  It produces little orange cherry tomatoes that are so sweet, they taste like candy.

The weather has been cool enough that even knitting on a worsted weight sweater has been possible.  I finished the first sleeve on the Kerry Cardigan. 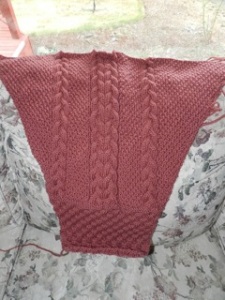 This is proving to be a fun knit.  It has enough cabling to be interesting, but not so much that you can't watch TV while you knit.  I thought I had finished all the pieces to hubby's Cambridge Cardigan, but when I got ready to block, I realized that the second sleeve was two inches shorter than the first!  I had forgotten that I had lengthened it, and in my usual disorganized pattern, had not taken notes.  So I had to rip back and reknit part of it.  The knitting is done now and I will start sewing it together soon.  Promise.

Knitting seems to be taking a back seat to scrapbooking lately.  Hubby was gone for a few days visiting his sister in San Diego.  He comes home today (hooray!).  While he was gone, I did some marathon scrapbooking.  In fact, I think Maggie felt neglected.  I often sit in the corner of the couch while working on my laptop and I looked up to find this collection of toys gathered at my feet: 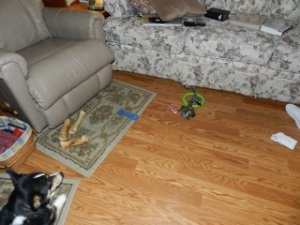 I think she was trying to tell me that she wanted to play.  So we went outside and threw her ball around for a while.

I've been working both on new pages and redoing some old paper scrapbook pages.  Here's an example of an old paper page reworked digitally: 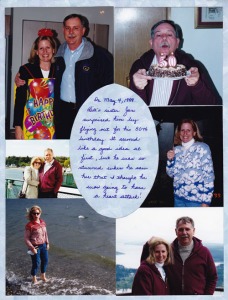 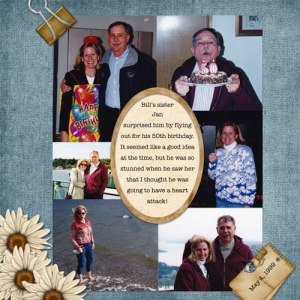 Before (I never even finished this paper page): 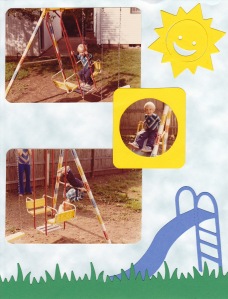 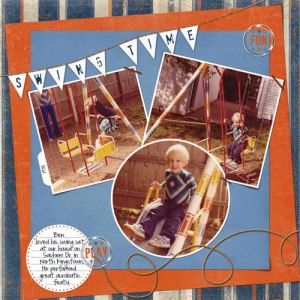 The newest tutorial from Scrapper's Guide was on scrapping your travel photos, so I was finally able to get on pages a record of our trip to Scotland when we first met Abby:

This is just the first page of a four page spread.  And finally, a recent tip from Scrapper's Guide on gradients and blending helped me create this page:

I can't say enough about the tutorials from Scrapper's Guide.  They have really helped me bring my scrapbooking to the next level.  I can honestly say that if I was constrained to using paper, I probably would not have continued the scrapbooking.

Well, off to get showered and dressed.  So excited that hubby is coming home today.  The older we get, the harder it seems to be when we're apart!