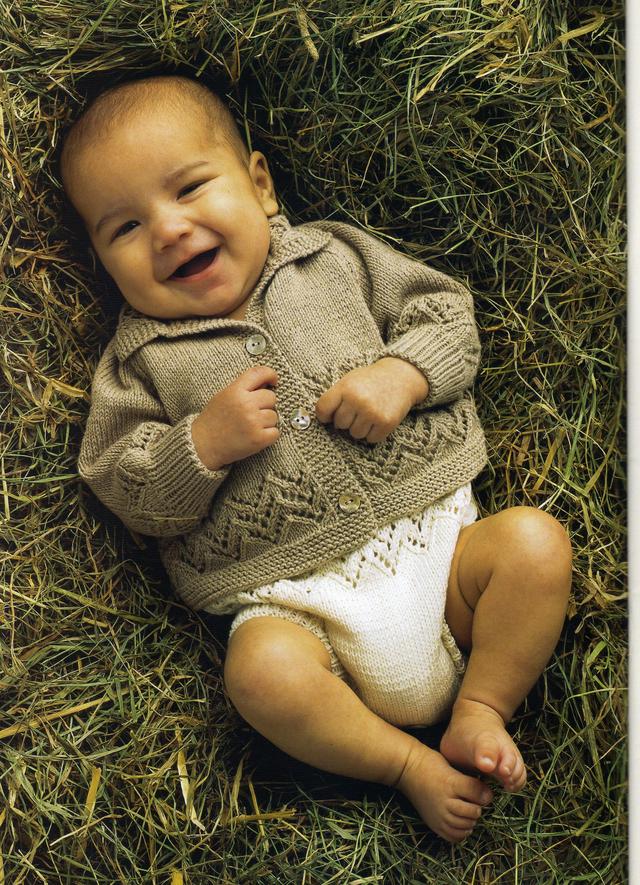 And the baby knitting continues! I’m only three repeats away from finishing the baby afghan, so I cast on for this. This will be the “boy” set in blue Dale Stork. I really like this yarn. It is soft and knits easily, although you do have to be careful of splitting, especially with yarn than has been frogged a couple of times. Yes, ripping has been done. I seem to have a terrible time with gauge on Dale patterns. I did a gauge (my LEAST favorite part of knitting) and was about ½ stitch per inch off on size 2 needles. So, I naively thought that if I went down one size I’d be just fine. “Hah,” she says, “Hah!”. I blithely cast on and after two inches measured. I was still ½ stitch off. So I ripped and decided that rather than go down to size 0 I would go back up to 2’s and just rewrite the pattern. Now, I am perfectly capable of doing this. I have knit several sweaters and a Shetland shawl of my own design. But after a few inches of this, I changed my mind and decided I really didn’t want to have to rewrite the whole pattern. So, I ripped again and decided to proceed with size 0’s. I’m not even going to measure gauge – I will just let the chips fall where they may and assume that this sweater will fit the baby sometime in his life – who says I’m not a cockeyed optimist? Since the “girl” set is also Dale and in the same weight yarn I will do the same thing. I think there is no chance that it will be too small – if anything a little large. The funny thing is that my LYS has the same sweater knit up in the same yarn and they are also ½ stitch per inch off! Go figure.

On the non-knitting front, I am now the wife of an officially retired firefighter. The first few days have gone very well, but I think the last week of work was rather emotional for him. The hardest was saying goodbye at the Daycare Center on base. Bill has been responsible for years for fire safety education and fire drills at the center. All the staff and kids know “Fireman Bill”. The center director was in tears when she said goodbye. His first day of retirement, Bill went down and had coffee with his car club buddies (think a male “Stitch and Bitch” without the stitch). That was great fun for him and I think will be a good replacement for all of his work buddies. Wouldn’t you know though – we went out to dinner to celebrate on his last day and ran into another old retired fireman who insisted we join him for dinner and then regaled us for an hour with old fireman stories. The perils of living in a small town!