So . . . would anyone like to hazard a guess on how long it takes to go from this: 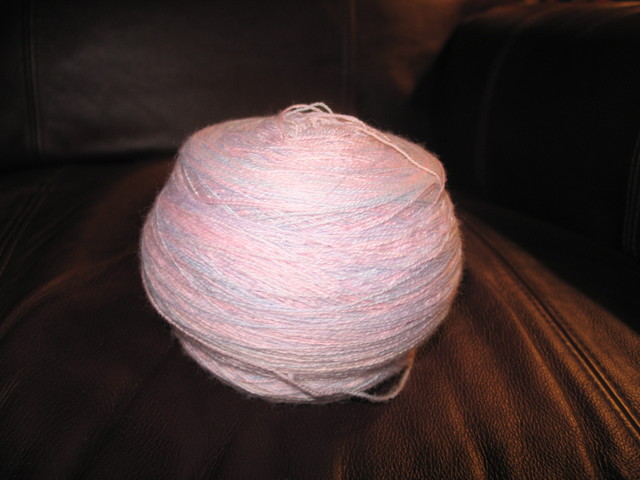 Not as long as you might think – about half an hour. It never amazes me at how much less time it takes to frog something than to knit it in the first place. I decided last night that this wasn’t coming out as lovely as I hoped. Certainly not enough to justify the terminally boring knit. I’ve never been reluctant to cut my losses in knitting, so out it came. And I’ve ordered the pattern for this. I’ve heard good reports on the Fiddlesticks patterns, and this looks intriguing. Of course, it has bobbles – in this case “nupps” – so I may be kicking myself down the road, but isn’t it pretty?

However, until the pattern comes it leaves me wondering what to do. I may need to start a small lace scarf to preserve my sanity. It’s way too hot to knit on the two Norwegian sweaters. Yesterday Seattle set a record high of 87 degrees. It was probably cooler here, but not by much! That may not seem hot to those in other climates (especially with our lack of humidity), but we Pacific Northwesterners are real heat wimps! We can take any kind of wet the weather sends our way – clouds, drizzle, rain, sleet, hail, snow – but we melt in the heat. In our defense, although most businesses are air conditioned, few homes are. The saving grace is that it cools off in the evening. And no matter how hot, our bedroom seems to stay relatively cool.

Hester is glad she got rid of most of her winter coat before this heat wave. We were warned that Corgis shed, but I don’t think anything could have prepared us for this: 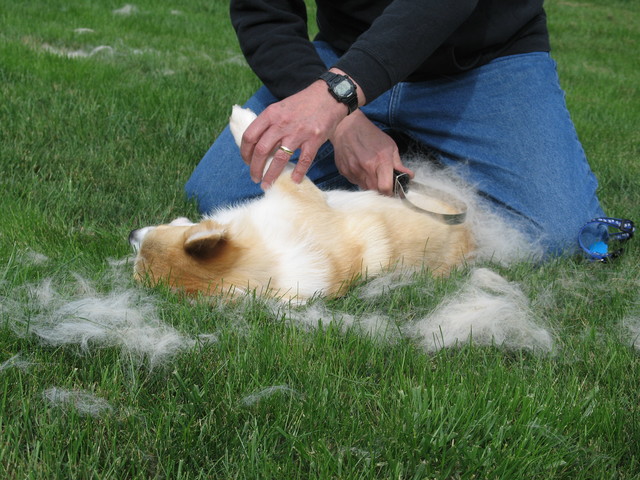 We were getting as least twice that much every day! I’m surprised she’s not bald. I was a little alarmed when we came back from England – she looked so skinny – but realized it was mostly the lack of her heavy coat. At least she likes being brushed. When she sees us pick up the brush or shedding comb, she comes running over and plops down on the floor and closes her eyes in bliss. In fact, it’s funny to watch the two dogs try to push their way in front of each other to get brushed. Sure makes grooming easy! Well, it’s 5:45 a.m and I’ve been up for almost an hour. I still can’t manage to sleep any later in the morning. Maybe it’s my imagination, but it seems as if jet lag gets harder to adjust to as you get older. Just don’t call me at 7:00 p.m. tonight – I’ll probably be in bed!