Thank all of you for your kind wishes this week.  Please forgive me that I haven’t responded to all of you personally, but it has been a very difficult week for us.  Bill and I have both been a little overwhelmed by the depth of our grief for Hester.  We have lost dogs before, but we’ve never felt such a sense of loss.  Perhaps it was her age – she was only 3 years old.  But I think it is more.  Sue commented that in our lifetimes we can have that one dog that really touches our hearts.  I think Hester was that dog.  Who knows what will come in the future.  There will definitely be more Corgis and I hope that we find another very special dog.  But right now it’s hard to imagine any as special as Hester.  Kirby is not making it any easier!  He wanders around the house whining, looking for her.  He keeps checking her crate to see if we just forgot to let her out.  We were very concerned about him because he stopped eating.  He’s never been a very robust eater and is a little on the thin side.  But he finally relented yesterday and we’re hoping he’s on the mend.

My weekend with my sister had been planned in advance, so hubby encouraged me to go.  I felt a little guilty about leaving him in the quiet house with only a grieving Lhasa Apso for company, but it was good to get away.  On Saturday afternoon we both volunteered in setting up for a huge charity wine auction.  I am SO not a wine person – it was a little mind numbing to me to think that someone would pay over $1000 for a bottle of wine, that they’re not even going to drink for cryin’ out loud.  My idea of a nice wine is a chilled glass of Riunite Lambrusco.  Lorette is probably having heart palpitations – she’s tried, really she has!  But I’m glad they were willing to spend that kind of money because about $600,000 was raised for various northwest arts organizations.

After setting up, my sister changed into stunning evening wear and worked the auction, while I retired to the hotel room at the Sheraton with a bag of snacks and my knitting.  It was very comforting to bury myself in my lace.  The repetition of counting and seeing the beautiful pattern develop helped me not to dwell on our loss.  I did some swatching for the Princess Shawl, but the results were a little inconclusive.  I’m still not sure what I’m going to use.  It’s a moot issue at this point because whatever I use, the yarn will cost about $100, and that’s just not in the budget right now.  I had hoped to start around the first of the year, but that might not happen.  In the meantime, I’ve joined a Princess group on Ravelry and I’ll be following every one else’s progress.

On Sunday my sister treated me to tea at the Fairmont: 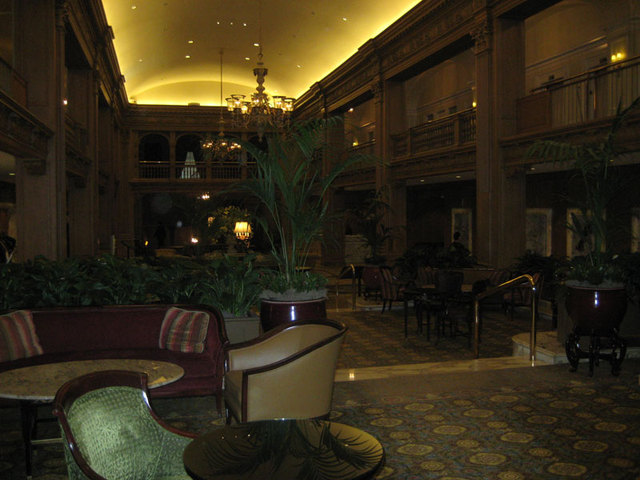 On the knitting front, the blue blob is just that – only blobbier.  There will probably be no pictures until it is done because you just can’t see anything.  And I’m not willing to try and spread it out and risk having it slide off the needles. I’m to the point where things are really starting to slow down.

Not a great photo, I know, but I didn’t have the energy to fiddle around any more with it.  This is an Elsebeth Lavold design – I’ll get the specs for you next post.

9 thoughts on “Knitting as comfort”