I don't even want to know what kind of Google hits I'll get with that one!  Hubby returned home safely from San Diego with his new baby:

Carmen (clever name, eh?) is a 1970 Karmann Ghia convertible.  As you may recall, he had a 1930 American Austin.  Well, the right offer came along and he sold it to a guy in Oregon.  This lovely lady came up on eBay and after copious research and correspondence with the owner, he decided to bid.  He really had no hopes of winning and was stunned when he did!  Apparently there were several bidders pretty miffed that he won and one even called the owner and offered her $3000 more, but she did the honorable thing and honored the auction.  She said she knew she did the right thing when hubby asked her if the car had a name (it didn't).  She knew it was going to someone who would love it and care for it.  We had fun tossing names around.  We knew it was not a "he" – definitely a "she".  Hubby said he had to drive her before coming to a conclusion, but by the time he arrived from San Diego had decided "Carmen" was appropriate.  Yesterday he could bear it no longer and put the top down for a little jaunt.  It was, after all, sunny and at least 40 degrees!  I didn't tag along.  It's got to be a little warmer to tempt me.

Carmen is going to be lots of fun for going on cruises with our car club.  There is plenty of leg room so there's a perfect spot for my knitting bag.  It remains to be seen whether or not I can knit with the top down!  That's the car's top – get your mind out of the gutter!

Not a lot of knitting content this week.  I'm still battling this bronchitis and feel kinda puny.  My powers of concentration are not at their peak.  I did pick up Queen Silvia briefly, but knew that nupps just weren't on the ticket for me until I feel better.  I finally decided to start a new lace project. The Hidcote Shawl by Miriam Felton fit the bill.  I needed something that would capture my interest, but not be too complicated.  I actually started this with some black lace yarn I had on hand, but quickly decided that was a tactical error.  My old eyes needed something a little lighter: 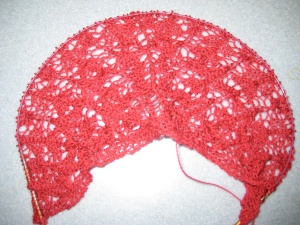 I'm not sure exactly what the yarn is – it was in my stash with no band, but it is probably 100% Merino – very soft.

This week Isobel made a list of her favorite things.  They are (in order):

11.  Gargamel (the villain from the Smurf cartoons)

I came in third after ice cream and Maggie!  Poor Mei-mei came after the dogs and barely beat out a villain.  Abby said they are going to have to work on that.

And, to distract you from the fact that there is pitiful little progress on knitting, here are some updates of my beautiful granddaughters wearing their Christmas sweaters: 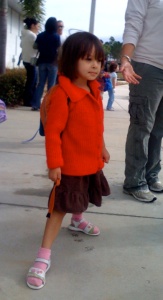 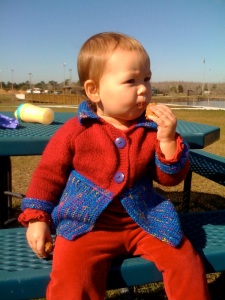