One of the first things I'm going to do when I retire is get myself organized!  Remember you heard it here first and you can laugh at me later.  I decided my goal for this weekend was to finally seam two sweaters that had been languishing in a basket by my bedside for way too long.  At least I thought they were languishing in the basket by my bedside.  I decided to tackle Abby's Cable and Rib Jacket first.  Only problem was – I couldn't find it!  How can you lose a project like that along with about 10 remaining skeins of yarn??  I realize that with everyone living here for two months things were pretty unorganized, but it's a small house.  How far could it have gone?  After about a half hour of searching I found it and successfully finished it except for the zipper: 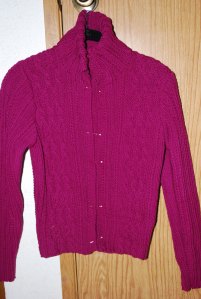 I had to special order the zipper, but with any luck it will come this week and I can take it to Abby on Thanksgiving.  Speaking of Thanksgiving, Abby is doing her first official family Thanksgiving dinner this year and her menu sounds delish!

Saturday I finished up hubby's Torgeir: 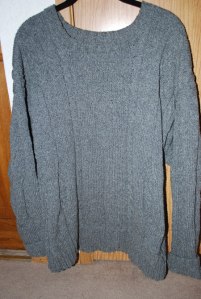 Sorry for the crappy picture, but daylight is in scant supply here and the flash washes out the details.  One of the first things I'm doing when I retire is take a photography class.

The sleeves came out a little longer than I had expected – one of the downfalls of a dropped shoulder.  But all in all he seems to be pleased and I'm very pleased to have two projects checked off my list.  In discussion with Marguerite, I am seriously revisiting the idea of only having 3 (or maybe 4) projects going at a time.  Ok, you can stop laughing now.  We call it "Knitting Peace" and I do want to have more discipline in my projects.  I'm thinking that a shawl, a pair of socks and a sweater would give me enough variety to keep my brain stimulated.  The only reason that I would throw a 4th in would be if the other three were not good traveling projects.  Gotta have a traveling project for those trips down to Snohomish.

And, speaking of trips – we popped down to see the kids over the weekend.  Ben needed hubby's help with a project and Abby and I took the girls over to see my sister.  We also wanted to take Maggie down to see how she would fare with the other dogs in a different environment.  She's definitely an alpha female and we didn't know if she would try to assert her dominance on their dogs' territory.  Turns out she did fine – the only scuffle was when she and their dog went after a toy at the same time.

We had a great time at agility tonight and the trainer gave me some tips on handling Maggie's aggressiveness.  She explained that Maggie is indeed an alpha bitch and she considers it her job to keep all the other dogs in line – however she does it by aggression.  We have tried controlling it with positive reinforcement, but it just hasn't worked, so the handler suggested some negative reinforcement – every time she got aggressive I was to grab her collar and shake her while yelling "No!" That's just what she needed.  After just three times she calmed down and coexisted peacefully for the rest of the evening.  I guess she just needed to know I was more alpha than she was!  Just don't call me a bitch!