We've always opened our presents on Christmas Eve, but with the girls we needed to change things around a little.  We didn't want them up late and tired and cranky the next day.  So they drove up to the island for Christmas Eve and we did our stockings:

The next day we drove down to their house and opened gifts and had a wonderful brunch cooked by our dil.  As is our custom, we read the Christmas story before opening our gifts.  This year the story was read by our very own Isobel:

Mei-Mei announced that she did not want to hear the Christmas story.  Thankfully, lightning did not strike.  It was so much fun watching the girls open their gifts.  Their parents are raising them with such an attitude of thankfulness and they were so grateful for everything they received.  Here they are modeling hats and scarves given to them by Uncle Allen:

At least there were some knitted gifts under the tree!  Our gift to Mei-Mei was a little pink fairy costume and it was a big hit! 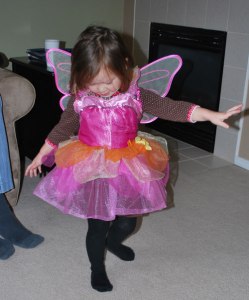 On my end, yarn and IOU's were gifted!  Hubby received a box of yarn for a Cambridge Jacket.  He liked Ben's so much that he needed one of his own.  I wasn't sure of the color and he requested something different than was in the box, so it has been returned and a nice charcoal grey heather has been ordered.  I gave my sister an enrollment in the "2011 Sock of the Month Club", which entitles her to one sock each month for a grand total of six pairs this year.  I'm already ahead of the game!

This is Sunshine by Cookie A.  I seem to have misplaced the ball band, but as soon as I locate it I will update the information on my Ravelry page.

Hubby came through big time with a gift certifcate for our LYS, along with a post-it note informing me of a big after Christmas sale.  My original intention was to get yarn for a sweater for me, but there wasn't enough of any of the yarn I wanted so I splurged on sock yarn!   This should keep me occupied for a long time!! 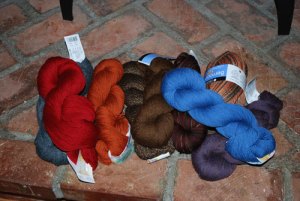 As usual, at this time of the year I start thinking about resolutions.  I think this year I will look at them more as goals.  Resolutions can carry such a negative connotation.  Several of my goals include:

1.  Dejunking and destashing.  I really seem to be a pack rat when it comes to magazines.  I've been collecting Quilters' Newsletter since the 70's and it's time to bid them adieu.  I'll be selling the earlier editions, which have some collector value, on eBay.  The rest I will go through and tear out any patterns I want and file them in a notebook.  Then off to recycling they go!  This is a HUGE step for me!  This is also part of a redecorating and clearing out of my sewing room, which includes a new paint job and wood floors.

2.  Read more.  I do read a lot now, but I like rereading books and I've gotten into the habit of only reading books I've read before.  I need to branch out and vary my reading diet.  I think this will help:

Hubby questioned why a Kindle when we already have an iPad.  There were several reasons:  The price has come down considerably.  Even books are getting cheaper.  I got a New York Times best seller for only $5.00.  The iPad is definitely much better as an all around tool, especially for web browsing and playing games, but the Kindle is much, much lighter.  I can even throw it in my purse.  I don't have to share.  The iPad belongs to both of us and often when I want it, hubby has it.  I can be selfish with this!

Of course, there are the usual diet and exercise goals.  I think I'm going to approach it a little differently this year.  Each month I'll set a different diet and/or exercise goal for the month rather than trying to look ahead for the entire year.  I don't need any drastic changes; I just need to instill a few healthier habits.  For January my goal will be to add more fruit to my diet.  Hopefully this will help replace my unhealthy attraction to sugar!

Off to spinning group today.  I haven't really done much spinning in the past few months.  With my sewing room out of commission, it will be nice to have something besides knitting to turn to.  Happy New Year to all of you!!