What week! My husband and I both came down with a bad bug, although he got it worse than I did. The worst part is that the doc told us we were to stay away from my mother-in-law since her health is so fragile. This was kind of upsetting because she just moved to an adult group home and we wanted so badly to be there for her to help make the transition. We kept in touch by phone, though, and the good news is that the transition has been a very good thing for her. She is dealing well with her husband’s death and is actually making tremendous progress, healthwise. As long as she stays away from us! I think that we’re on the road to recovery at last, though.

One thing about being sick is that it gives you an excuse to just sit on the couch and knit. Which I did! 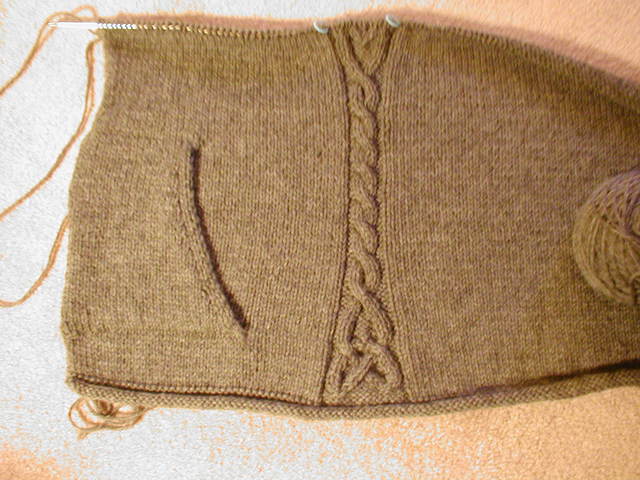 The color is not real true, but this shows the detail well. I find knitting on this to be almost hypnotic. Must be why everyone gets hooked on it. I have to admit that this was my second start on it. I have no idea what I was thinking, but I initially started the 48″ size. Only in my husband’s dreams am I that busty!! I got as far as starting the pocket and realized the error of my ways, frogged and started over. I’m glad I did – I probably could have worn the larger size, but it would have been pretty baggy.

I really do need to put it aside for awhile, though (hmmm – have I said that before?) because I have some other projects that really do need to take precedence. I really, really need to finish the baby quilt so I’m not stressing at the last minute, I need to get cracking on my toddler socks for CIC (finished one, but will wait to post pictures until both are done) and, of course, school. I did manage to get a lot done this week. The tough thing is that my class on Child Abuse is really, really depressing. The Sociology class is almost done, though! One paper left on: 1. Compare the theories of Durkheim, Simmel, Gans and some other guy whose name I can’t remember (yeah, you’re waiting with baited breath on that one, aren’t you?) 2. What should the government do about obesity (ban Big Macs?) and 3. Is civil obedience ever justified (the American revolution, the underground railroad, Gentiles who hid Jews from the Nazis – need we say more?). So there, once again, you have subjects on which I have to expound for nine pages. Then a final exam and I’m done! Well, at least for that class. I’m really have to give myself some pep talks to keep going. I should have done this when I was younger!