That Debi (besides doing a great tutorial on beading – go check it out) is a pretty wise woman. I had posted my ponderings on how many projects it was healthy (at least for me) to have going at one time. I had mentioned having a long term lace project on the needles and she suggested that I rethink that. She commented that sometimes making something long term causes you to lose interest in it. She pointed out that sometimes just slogging through the boring parts and getting a finished object is worth it. I think she’s right. As I mentioned, I was feeling some stress about having so many things going, so I have determined to finish some. I found that actually forcing myself to sit down and work on them rekindled my interest and the results have given me a real feeling of, uh, unstress? And lookee here:

Why, yes – that is Rogue! A little lumpy because she hasn’t been blocked yet, but she is all sewn together waiting for the zipper to arrive. I’m hoping it will come soon so I can sew that puppy in and have Rogue to wear when the weather turns nippy. And that’s not all. Following Debi’s sterling advice, I picked up the Barbara shawl and decided not to work on anything else until it was done.

I am now knitting on the border! It’s going a little slower than I might hope, but I think less than a week’s work and it will be done. I’m sad to report, though, that the Crystal Palace Merino scarf has been discarded. Impossible to frog – so I just broke the yarn and threw it where it belonged – in the trash. Life is too short to work on something that gives you that much grief. After Barbara is done, I will probably return to the tried and true Estonian Scarf. My sister has already picked out the color of Alpaca Cloud she likes. Don’t get me wrong. I find nothing wrong in someone having a gazillion projects going at once. I’m just discovering that it’s probably not for me and that simplifying is giving me a real sense of relief.

Here’s the latest picture of Izzy. Mum had to buy her a pink hat because everyone keep commenting on what a cute boy she was. No mistaking this for a little girl! 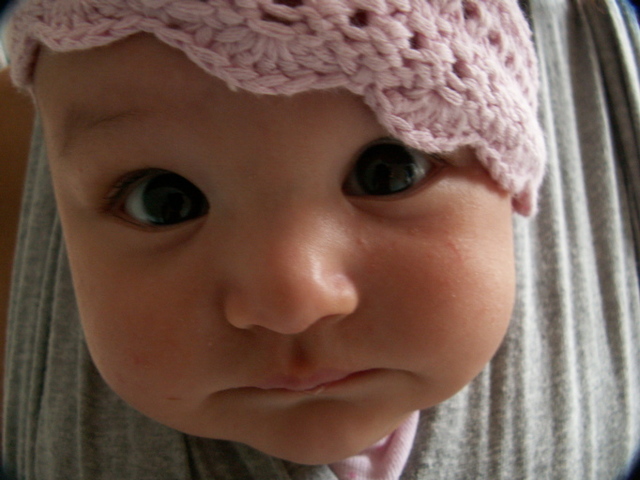