Knitting was on the road this weekend. Along with my husband and sister, I went to a Washington State University (Wazzu to those in the know) football game in Seattle. WSU is located on the eastern edge of the state, but lately has been coming over to the west for at least one game a year. It’s amazing all the Coug fans that come out of the woodwork in a normally University of Washington (Husky) town! We almost filled a professional football stadium. In all fairness, though, I think a lot of people came to see the opposing band. We played Grambling, and although we wiped them out on the field, there was no contest with the bands. Grambling rocks!! They’ve been traveling all over the area doing benefits (they’re from Louisiana) and have played to sell out crowds. They did not disappoint us – I just wished they could have gone on longer. Before the game there was a reception of us “non-traditional” (read “old”) students: 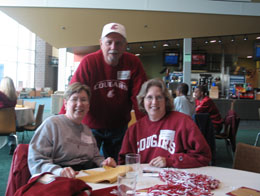 My husband even won the door prize – a jersey worn in a game by a star player whose name eludes me. I guess it takes a guy to appreciate getting a grubby, ripped up jersey. I just hope they washed it. And, ala Yarn Harlot, there was knitting at the game (although not necessarily during the game):

Before the game we sat in the Qwest Field center watching the crowds and having a great time. My favorite was the little old lady standing on a chair in her Cougar gear singing along with the marching band – she knew ALL the words to the fight song! Or was it the little 2 month old baby in his Cougar outfit? His dad was all excited that this was his first Cougar game. You gotta know – this school has spirit! And I met an elderly gentleman who bragged that he was still a Cougar – class of ’52!

On the knitting front – I’m coming down to the wire on Madli and may actually finish her this week. I’m anxious to finish my two lace projects because only then will I allow myself to start the Unst shawl. Izzy’s Christmas present is coming along nicely and should be done in plenty of time (she says with confidence and a just a little bravado). Two weeks from Tuesday I should actually be able to measure her in person! Tomorrow is a big day as they go into London and Isobel gets her passport – officially being recognized as a U.S. Citizen. Way to go Izzy!!