The Babies and Bears juggernaut plows on!  I finished the third and have cast on for the fourth: 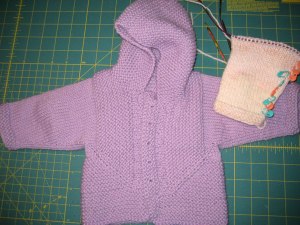 Several knitters have expressed interest in the pattern, so I thought a critique and some suggestions might be in order.  The construction on this is most of the fun.  You start at the sleeve edge and knit one half of the sweater.  A small front band with a pattern is then knit on and the first half is set aside while you knit the second half.  Another front band goes on that and then a back band goes on only one half and is then kitchenered to the other half.  Neckline stitches are picked up and a hood knitted on.  The pattern calls for the hood seam to be kitchenered, but I did a three needle bind off, which I think gives more stability and a nice, neat finish.

The last step has you putting held stitches from the left band, across the bottom and right band on one needle and knitting a front/bottom band with buttonholes.  It is at this point that I think a break from the pattern is in order.  The sweater, knit as instructed, is too short.  I tried several different ways of dealing with this.  On the first, yellow sweater, I did short rows across the bottom. 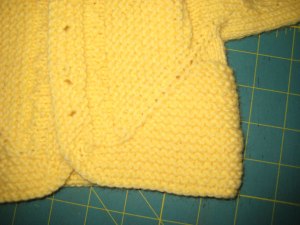 This helped some, but I still think it's too short.  On the next sweater, I tried another method of short rows, but this came out even shorter.  It really escapes me exactly what I did, but since I don't want to do it again, that seems a moot point!

On the third sweater I hit pay dirt.  Before picking up the last set of stitches, I put only the bottom stitches on a needle and knit 10 rows of garter stitch.  I then put all of the stitches on one needle and finished as instructed.  This does give two more ends to weave in, but I think the finished sweater has much more pleasing proportions:

This also gives a very pretty back:

Probably the biggest disappointment I have with the pattern is that it is technically only written for one size.  It was advertised as fitting from newborn up to 36 months.  But in order to do that, you have to change the weight of yarn.  A fingering weight will fit a newborn, but for a three year old, you have to use bulky weight.  I do understand that the construction of this sweater has limitations.  Like the baby surprise jacket, it does not easily lend itself to proportional adjustments.  Cottage Creations has come out with an adult size (I believe without the hood), but child sizes have been more elusive.  But for the purposes for which I intend it, as a charity knit, it fits the bill perfectly.  And I do think it will become my "go to" baby shower gift.  If I want a hoodie sweater for a child, the Wonderful Wallaby has any size you could possibly want, and they have recently come out with a cardigan version with either a zipper or buttonholes and a hood or a collar.  Oh, and the Babies and Bears only takes two skeins of Encore, so it is quite an economical gift as well.  And have I mentioned – no seaming!!  Once you've made a couple, you'll have the pattern memorized, so it's a good on-the-go knitting project.

I think now, though, I need to give my fingers a rest.  Although I plan to keep on churning out little sweaters, I think I'm ready to pick up my Cookie A socks, which are feeling totally neglected.

Have wonderful Memorial Day weekend.  Remember the men and women who have made sacrifices for our freedom.  Hubby is driving in the Memorial Day parade and will be carrying a Pearl Harbor survivor.  And our weather is supposed it be picture perfect!!

3 thoughts on “Babies and Bears”