Those who know me well know that I hate shopping.  And I especially hate clothes shopping.  As a result, my wardrobe is sadly outdated.  Thankfully the standards in a pediatric office are a little less casual than say, an upscale cosmetic practice.  So it surprised me a little that clothes shopping served as a little retail therapy this week.  I was hoping this week might be a little less stressful, but while less frantic, stress was in good supply.  I'm having trouble with my DSL.  For unknown reasons, it just quits on me.  It doesn't seem to matter what I try to do to resolve it, but after a while, it spontaneously comes back.  Not a big deal unless you're trying to close out the day (which requires a connection with the bank) and you really, really want to go home!  Then yesterday, I got a call at home at 6:00 a.m. (never good news!).  The anesthesiologist called to say that his equipment wasn't working and he had to cancel.  We had a full day of general anesthesia scheduled and I had to call a bunch of disappointed parents to tell them we had to reschedule.  It escapes me why the anesthesiologist can't call them – he has all their numbers.  Must be why I make the big bucks (Haha!!).  So anyway, I decided to take my new found day off and go shopping on the mainland.  My original plan was just to buy a few summer tops.  However, I came away with 7 tops, two pairs of slacks, two dresses, some undies and two (count 'em) two! pairs of shoes.  Just about everything was on half price, so I really didn't spend a ton of money.  So I may still be stressed, but at least I'll look good!

Today is a blessedly free day off with nothing pressing, so I decided to block Hidcote.  I had help: 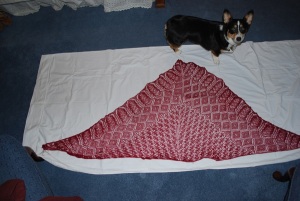 Maggie was in a bit of a funk because Kirby got to go ride in the car this morning.  Kirby would just as soon have forgone the trip to the groomers, but Maggie was disconsolate!  It's long been a standard in the family that Kirby is the lap dog and Maggie is the car dog.  She was very unhappy and parked herself in the middle of the living room, put her head up in the air and howled!  I've never heard her do that before.  Then she pouted:

About halfway through the blocking process she decided that "zoomies" were in order and started tearing, at breakneck speed, around the bedroom.  Unfortunately, her route took her right over the shawl I was trying to block.  Thankfully I remembered a suggestion of bones with cream cheese stuffed in them and frozen as a dog treat.  I had put one in the freezer and Maggie was more than happy to be diverted with that.  So Hidcote was finished blocking with no further incidents: 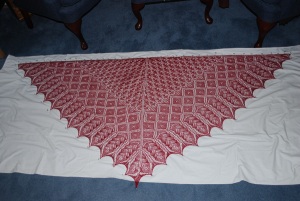 Stats:  Hidcote by Miriam Felton, unnamed lace yarn from my stash, size 4 Knitpicks Options needles.  Started in January, finished about a month ago, but not blocked until today.  While this was an interesting knit, I did find several errors in the pattern.  They were not enough to throw an experienced lace knitter off, but might trip up a novice.  They may have been corrected in later versions of the pattern.  By the way, I would have never been able to capture that picture with my little point-and-shoot.  The new camera with wide angle lens is wonderful!!

Now what to do with the rest of my day?  I may work on some digital scrapbooking stuff.  I have a class that I bought months ago that I have not had time to play with.  How nice to have a day stretching ahead with no firm plans!