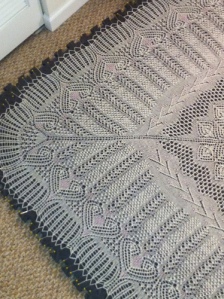 I just could not resist the aweseomness of all the different patterns.  It will definitely keep me intrigued and challenged!  Although I have the yarn for Evenstar, it will need to wait just a while longer.  In addition to the fact that this is a new knit for me, one of the things that sent this to the top of the pile is that I actually found yarn in my stash.  I have enough Knit Picks Bare in laceweight to accomplish this, with enough left over for insurance.  The option is given to use beads, eyelets or nupps and I have chosen to do nupps.  I'm not a great fan of doing them, but since this is knit circular (although it is square, if that makes sense), you don't have to wrestle with purling them all together – you knit together through the back loop.  I find this SO much easier.  Here is the start: 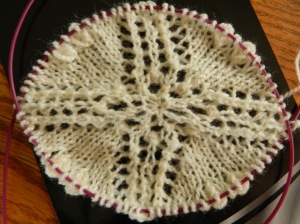 As much of a bear as this was to start, I think I'm going to start over because I don't like the way the center came out.  Part of the trouble was a catch in the join of one of my Knit Picks needles.  I have really loved these needles and they've been my first choice for laceweight, but I do find the quality control lacking.  I found these Knitters' Pride needles at my LYS and am going to give them a try. 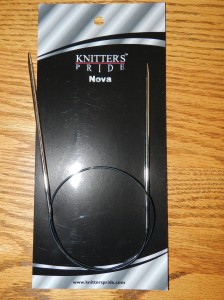 They are priced quite reasonably and the owner of the LYS said the cables were very flexible and the joins smooth.  However, they do come with a warning!

I told hubby he was absolutely forbidden to use them, as he is not adequately trained!

On Thursday I took a bus down to the Sewing Expo in Puyallup (for you non-Washingtonians, that's pronounced "pew-allup") with a group of fellow quilters.  We had a lot of fun, spend a boatload of money and at least one of us (ahem) came home with a new serger: 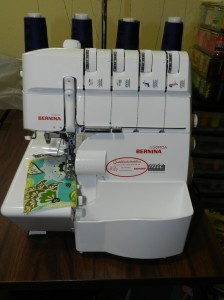 My old one is on its last legs and I spend more time fiddling with broken parts than actually sewing.  The time and price seemed right and this found its way onto the bus with me.  Good news – it's a demo model and since they couldn't find the box for me, they threw in this pretty pink carrying case. 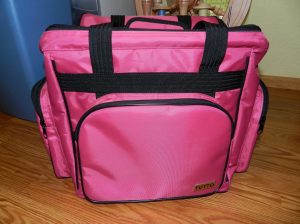 Bad news – they forgot to throw in the owner's manual.  We didn't realize it until it was being loaded on the bus and I didn't have time to go back to the booth to get it.  I'm hoping to go in for my free training next week and can pick it up then.  Until then, I'm just gazing at it fondly because I don't want to mess around with it too much and break something!

One of the projects I'll be using it for is to sew more doll clothes for my and Mei-Mei's dolls.  I found a pattern for costumes from the Wizard of Oz.  I've always wanted to sew a costume featuring my namesake and since I'm too old to wear it, my doll will do.  I know that Mei-Mei may not know about Dorothy and the Wizard of Oz, but I think she'll be pretty impressed with glittery ruby slippers! 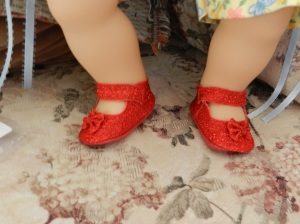 All these fun things are helping distract me from some vision problems I've been having.  I've been diagnosed with Posterior Vitreous Detachment.  The opthamologist said it's not uncommon as we age, although I am on the young side for this to happen.  Apparently the sac of vitreous fluid in the eye tugs and pulls on the retinal lining, especially in the macular region, as it shrinks when we age.  Many people get no symptoms at all, but I am in the lucky minority that is experiencing some rather pronounced effects.  Imagine someone coating your glasses lens with debris and dirt – only you can't clean it off.  It's especially noticeable when looking at anything light colored.  The bad news is that there really is nothing they can do until there is actual detachment.   I am trying to accept it with as good graces as I can.  After all, I have friends who are dealing with a lot worse – chronic pain, cancer.  But as one friend noted, it's ok to grieve the loss of something before moving on.  The suddeness of this coming on has made me a little anxious about the changes that can happen to our bodies in a heartbeat (literally!).  However, I'm hoping that after throwing a major pity party, I will just move on and adapt.

I'm working on a quilt today and hope to have an FO in that area to show next time.  Toodles!